I’d like to share my first small, beautiful book: We Are Islands, a collection of original paintings and poetry. It’s for those who love to hold books in their hands… Continue reading →

Lady of the Lake

You linger in my mind,
Fluid and changeable
As the moody lake…
Continue reading →

Water…
It covers our world
In a moving blanket
Of currents and tides,
Pulses through our bodies
With each heartbeat…
Continue reading →

Marc Chagall loved Bella Rosenfeld.  In 1914 he came back from Paris to Vitebsk to woo and wed her.  In 1915 they married and she became integral to his art and life.

She is woven into his art.  His images of her are full of love, fantasy and romance.  He frequently shows them soaring over the mundane world around them.  Each time Chagall creates Bella’s likeness he shares the beauty he sees in and through her, his passion and their joy.

For the twenty-nine years that they were married she was his companion, his link to his roots, and his muse.  After she died unexpectedly in 1944 it took time for him to recover his desire to paint.  Then he returned to painting by creating new images of her.

Because no matter what the future held, her place in his life had to be affirmed.

Links to a couple of my favorite paintings:

Posted in artists, creativity, On Art 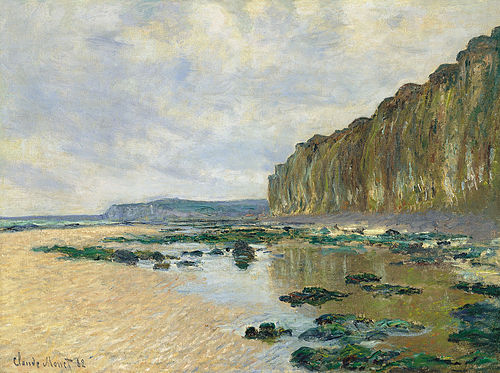 For Monet, creating art was all about painting the world as he saw it.  And he saw it as moving fields of colour and light.  When he painted these fields he created the illusion of a world lit by sunlight, made us see the world he saw as light glancing off water or filtered through mist or reflected off surfaces. 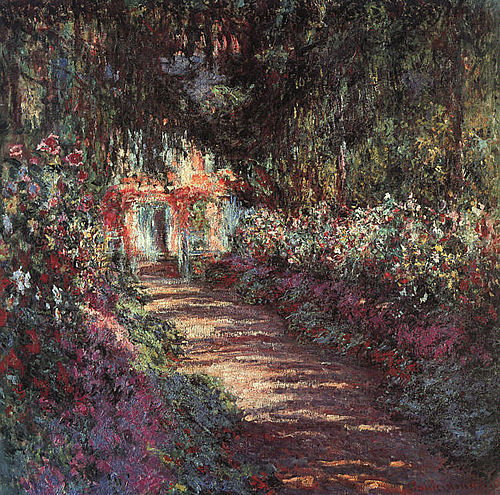 When he began to go blind in 1907, at the age of sixty-eight, he might have considered that a good reason to give up painting.  He was a successful artist, and financially secure.  Still he continued to work, though what he saw and how he painted changed. 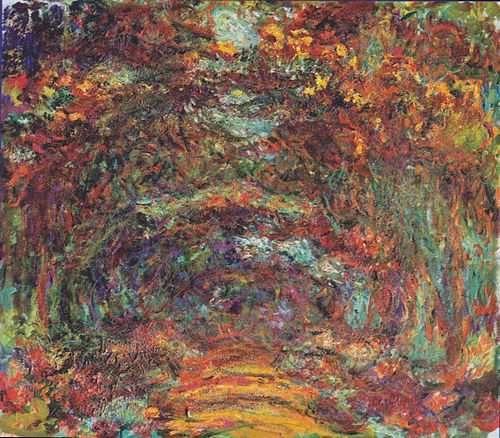 By the 1920s he was virtually blind.  In spite of that he began work in 1920 on a series of large scale canvases which he intended to donate to France.  On these huge canvases he painted quite differently, using broad areas of colour to create the effects he wanted and working in a way that was not to be seen again for years.

In 1923, when he was about eighty-four, he had two cataract operations. Once again how he saw changed, but his desire and will to paint did not.  He continued painting his beloved water lilies until his death in 1926. 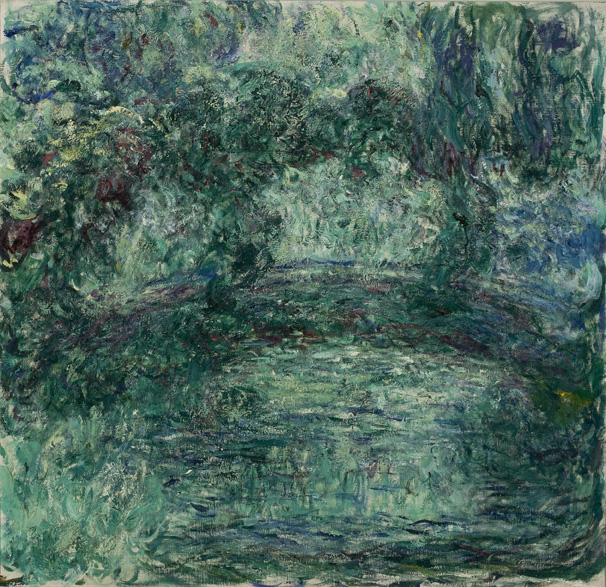 Even when he faced the obstacle of declining vision, Monet never stopped painting.  Instead he changed, adapting his way of working to make the best use of what he had – his knowledge, his skills and his remaining sight.  There were changes in the details, but the essence of his work remained the same.

There is a lesson for us all here – not to give up when faced with this kind of challenge, but instead to adapt and find new ways to do the things we need and want to do.

Thank you, Claude Monet – for the beauty of your work, the creativity of your vision and the example you set.

Posted in artists, creativity, Life and living, On Art

Hope, they claim (well actually, Alexander Pope declaimed) springs eternal in the human breast. A good thing, since hope is what keeps us going forward even when the way ahead looks bleak. Hope helps us move past our fears, reach out to others, imagine what could be. As an artist I spend a lot of time hoping. Continue reading →

The Importance of Being Curious

They say that curiosity killed the cat. Whoever they were, they were probably hiding something! Curiosity is the thing that keep us alive, that makes us ask questions and helps us learn. Continue reading →

Fitz Henry Lane and The Beauties of the Sea

There is a statue of a small, thin man in front of the stone house on the small hill that overlooks the coast guard station and Harbor Master’s Office in Gloucester Massachusetts. The wind is blowing; he is sitting on the ground looking intently out over the harbor; he is working on a picture. A pair of crutches lie beside him.

When I inquired I learned that the statue, created by Al Duca, is of the artist Fitz Henry Lane. I knew nothing about Lane then; what I have learned about him since is both intriguing and instructive.

There is a notion of the artist as disengaged from the world, the better to create; as a creature more given to fits of inspiration than days of long hard work; as a creature of genius divorced from the world of commerce. Fitz Henry Lane is one of the many artists who give the lie to this notion. His work and career show the rewards that can spring from hard work, planning, and a willingness to work with and for others, particularly when these are combined with talent, vision and the desire to learn and grow.

Born in Gloucester in 1804 and crippled early in life, Fitz Henry Lane is said to have turned his energies to art while he was still young. He decided to work actively to develop his talent for drawing and painting and his development took a major step forward after he went to Boston, at age twenty-eight, to work in Pendleton’s lithographic establishment, where he could earn, learn and hone his skills among the artists already working there. At about the same time he changed his name, by petition, from Nathaniel Rogers Lane to Fitz Henry Lane, the name he was to become famous under.

Pendletons was a successful and growing lithographic firm, where talent was both needed and nurtured. Here Lane could develop his grasp of the skills basic to lithographic work, refining his understanding and use of proportion, perspective, depth, tonality and balance as he trained with and learned from the more experienced and knowledgeable artists he worked with. It was a good apprenticeship in the skills an artist needed. From all accounts he worked hard and well and took full advantage of the opportunities he found, not least of which was the opportunity to become known to and work for well-off merchants and ship-owners. They had the money to comission or buy and the desire to own the kind of richly detailed and beautiful marine paintings Fitz Henry Lane created.

By the time he returned to live and work in Gloucester he was already recognized for the accuracy, detail and attractiveness of his work. He continued to work with his customers in Boston, even as his surroundings inspired him to create more paintings. His work continued to develop and evolve, from the many details of his early lithographs and paintings to the increasing spareness, luminosity and focus on the essentials of a scene in his later work, where subtle use of colour and composition creates scenes suffused with light and bathed in delicate hues. I find these paintings hauntingly beautiful.

Below are links to a few of Fitz Henry Lane’s pictures. They will open in a new window – just close it to come back here.

“The Burning of the Packet Ship ‘Boston,’” 1830, is an early watercolor which feels tighter and more contained than his later work. Image from the Cape Ann Historical Museum.

In “Gloucester Harbor from Rocky Neck”, 1844, the sky overreaches the detailed landscape below. This image from the Cape Ann Historical Museum Collection.

In “Stage Fort Across Gloucester Harbor”, 1862, the sky glows with light. In the collection of The Metropolitan Museum of Art

“View of Coffin’s Beach”, 1862, creates a sense of space and open horizons. In the collection of the Museum of Fine Arts, Boston.

Posted in artists, On Art

I have been reading Norman Rockwell’s story, as told by him in “My Adventures as an Illustrator”.  It is an interesting look at his life, work and methods.

I’ve learned a lot about him – that he was a hard worker, driven by a passion for his work.  That there were constraints that went along with working as an illustrator – he had always to keep in mind the company he was working for, what he was illustrating, and being sure that people who saw his work would understand what they were looking at.  That those constraints meant that he had to approach his work with thought, clarity and with deadlines looming.  That he studied and worked hard to develop and maintain his skills.  That he needed to travel and experiment to keep his work fresh.  That he researched and planned his paintings, using every detail to build the image he was creating.

And this is what I’ve learned from him, so far:

– That it takes time and practice to develop skill
– That details matter
– That it takes time to mature into knowing who you are and what you want to say
– That flops and failures are a reason to work things out, not a reason to give up
– That you must either communicate with people in ways they can easily understand, or find a way to show people how to understand what you are communicating.
– That there must be a part of you in every picture you create, so it is important to paint with heart and passion.

And I’m sure I will learn more as I continue to read and reflect.

If you’d like to know more about Norman Rockwell, artchive is a great place to start.

Posted in artists, On Art